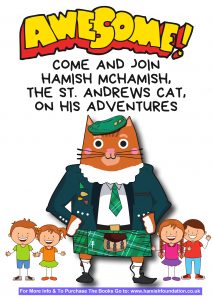 Issued by The Hamish Foundation

Lockdown 2020 resulted in life changes for everyone across the globe and included many people having time for creative inspiration previously unavailable to them. US based Scottish author and artist Robert Lewis Heron used his lockdown time at his home in Sarasota, Florida to allow his creative inspiration to flourish and he has created and published a series of children’s books based on the famous St Andrews cat, Hamish McHamish.

The illustrated stories follow Hamish on his adventures with his friends and the local children of St Andrews. The current four books and colouring book have recently been launched for sale on Amazon with proceeds from the book sales going to The Hamish Foundation, a St Andrews based charity which raises funds with a focus on projects to support young people and local St Andrews community initiatives.

The collaboration between the author and the charity resulted from a conversation prior to lockdown last Christmas between author Robert, his wife Diane and their friends Jerry and Linda-anne Beaulier who were visiting the US from their St Andrews home.

Robert explained: “Last Christmas, the Beauliers were telling us about their work with the beach wheelchairs project in St Andrews, and we were so taken with everything they had done. As we got more information from them about The Hamish Foundation, we knew we wanted to help in some way.

“We heard all about Hamish and, in early June, we discussed with the Beauliers the idea of doing a children's book about Hamish McHamish – The St Andrews Cat. That night, Hamish was in my dreams and I went to my studio the next morning and started his story. One story led to another and the series of books following his adventures moved from dream to publication”.
Debbie MacCallum of The Hamish Foundation said: “We are absolutely amazed and grateful to Robert for coming up with this idea and turning it into reality. The donation of his time, his creativity and his investment to support this fundraising initiative is wonderful and we thank him and his wife Diane for progressing everything so quickly.

“The series of books on sale on Amazon and hopefully with local retailers - J & G Innes, St Andrews have confirmed that they will be stocking the books - means that children around the world can enjoy Hamish’s adventures. The fundraising from the ongoing sales will be incredible for the Foundation and help support many new community projects to benefit the town, not to mention publicity for the town itself which is recovering from this year’s pandemic challenges.”

Hamish McHamish (1999-2014) was a ginger cat that lived in St. Andrews on the east coast of Fife, Scotland and was well known and loved by local residents and visitors. It was said he brought luck to your business when he visited and he was so well known that when Hamish crossed the road, the traffic stopped for him! Such is the fame of Hamish McHamish, a bronze statue was erected in his honour in the town centre.

Hamish McHamish – The St Andrews Cat series of children’s books are available on Amazon. Further books are planned with a publication date in time for the Christmas market. Retailers who wish to sell the books can order wholesale from The Hamish Foundation www.hamishfoundation.co.uk