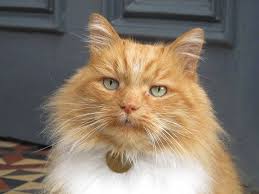 Hamish McHamish (1999 – 11 September 2014) was a ginger cat that lived in the University town of St Andrews, on the East Coast of Fife in Scotland. He came to national and international fame after the book entitled Hamish McHamish of St Andrews: Cool Cat About Town was published. Hamish built up a following on social media, with a dedicated Facebook page and Twitter account set up by fans.

Hamish was born some time in 1999 and initially owned by Marianne Baird, a retired BBC producer. In the first year of his life he resided at Ms. Baird’s home. During this time he became increasingly nomadic, being fed and watered at various homes in the town as he wandered around. He was known to spend most of his time in and around the houses and businesses on South Street in the town, close to his original home.

Ms. Baird still cared for Hamish’s well-being by ensuring he attended a veterinarian every year for a health check up and vaccinations. He was well loved by the town’s people and there is a statue in his honour which can be seen in the picture along with Hamish.

Sadly, not long after his statue was erected in town, Hamish passed away of natural causes. He will long be remembered with great affection by the people and visitors of St Andrews and because of this beautiful statue he will remain on our streets.